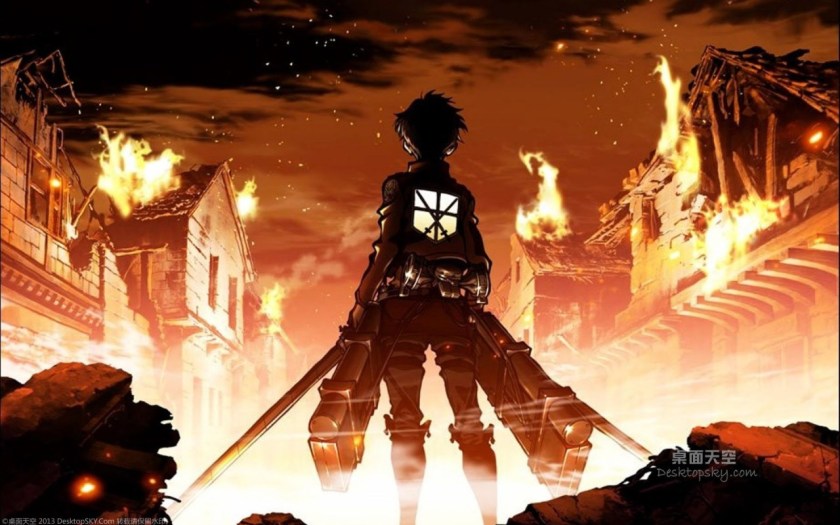 By the time Japan surrendered in September of 1945, approximately three million of her citizens, be they soldier or civilian, had paid the ultimate price and lost their lives in the name of the emperor. Nearly seventy of her cities had been gutted by firebombing. Over two hundred thousand civilians had been killed in the nuclear bombings of Hiroshima and Nagasaki. Upon their surrender, the United States dissolved the Empire of Japan and forced the nation to accept a democratic form of government. During seven years of occupation, Japan struggled to rebuild her shattered infrastructure and devastated sense of pride and identity.  What rose from the ashes and rubble of war was a country entirely different from what it had been – Japan had died, and been reborn.  It was from this experience that anime has taken its most common and recurring theme – that of death and rebirth.

“The aggression displayed by the American military carpet-bombing Japan, along with the use of the atomic bomb…forever imbedded a never-ending obsession with doomsday themes in…anime.”[1] Many anime tales take place in post-apocalyptic worlds: indeed, “the atomic bomb trauma and the ruined, burned, and scorched city became… ‘the original experience and the original picture’ of (anime).”[2]   Yet all does not remain ash and dust; society has either rebuilt entirely or is in the process of rebuilding.  Take, for instance, the cult-hit Akira, set in the highly technocrized city of Neo Tokyo, rebuilt after old Tokyo is destroyed by a mysterious white light.[3]  Neon Genesis Evangelion, another popular series, also takes place in a newly rebuilt Tokyo.  The original Tokyo was flooded and destroyed by what is known as “The Second Impact,” which we soon learn was the violent arrival of giant “Angels,” aliens from another world which could be said to be representative of the American attackers. [4]  Aldnoah Zero also takes place in a reborn Tokyo, fifteen years after a war with the aggressive colonies on Mars nearly destroyed the Earth.[5]  Cowboy Bebop is another anime in which the world has been destroyed; the explosion of the Moon Gate rendered Earth unlivable, and humanity has abandoned it for life among the stars.[6]  In Trigun, a lone gunman wanders a desert wasteland amongst cities that have been destroyed by a mysterious weapon or are dying from lack of resources – much as Japan suffered as the war progressed.[7]    Another lone wanderer is the mysterious hunter D, who rides beneath broken highways, through forgotten oil fields, and past the ruined satellites at SETI in the strangely empty world of Vampire Hunter D: Bloodlust.[8]

The list of animes which feature worlds experiencing death and rebirth stretches long; the few mentioned above are just a small sampling of the post-apocalyptic worlds which abound throughout the genre. In each of these animes, the old world has died, much as the last vestiges of the Japanese empire died with the falling of the atomic bombs.  And like Japan, each society has been rebuilt in a new and different form.  Anime is being used to emphasize Japan’s post-war hope that in spite of their devastation and whatever mistakes they have made, society can be rebuilt and reborn.  In the early post-war years, this was meant to give the desperate populace hope in the future.  The theme lingers today as an enduring reminder of what has been overcome.

Follow Assorted Musings from an Unknown Historian on WordPress.com